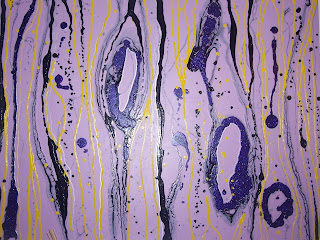 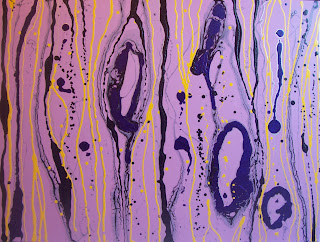 Here are a few Works in Progress as well as a finished one.

The first one, I think is done but have not fully committed to signing my name on it yet. It may be lacking something so I sit and ponder it when I can.

The second one (Explosion, 2 images) I feel is done and yet it also sits unsigned waiting for that final moment when I am satisfied that it is truly done.

The third set of images is a painting I did for my own home. It is large 4 feet by 3 feet. We recently redecorated our living room and had an open space above the piano. I incorporated colors and themes from the window treatments, accent wall and other features of the room. I like this one. It is my newest piece. But it is also unsigned for the moment. I just hung it and am waiting for it to settle into the room to see if it needs anything more. This is the first piece I have done with a particular location in mind, not my usual way of working.

(Sorry for the poor images, it is hard to take good pictures, after dark, with the camera that I have. And no I did not use a flash.)

These images are Copyright protected. David Corbet 2012.
Posted by Daav Corbet at 6:14 PM No comments:

Here is a sample for my next fantasy novella: Erkulys & Uryon in the Warlord of Ashkelon

The next morning Titos and Ernsto met Erk at the smashed gate of the estate. The sun had not yet broken the horizon. In the direction of the city, the cool air was pink with smoke. A guard stood in the trees near the broken gate. He waved at them as they moved off into the mist of the forest floor. Soon it would all burn off and the day would be warm, and humid.

“You have decided to walk with us in search of the Witch.” Erk observed.

“Yes. I thought if I was to go against Wicce then I should consult with the Witch.” Titos limped along, using a staff to support some of his weight. His wounds still lingered.

Ernsto led the way. He seemed to move at random, but Erk knew better. If one thing all of his travels had taught him was that magic was as subtle as the wind. But if you knew the signs you could see it do wonders. Ernsto followed a bird for a bit and then a wisp of mist. He checked rocks in a bubbling brook and then followed a rabbit. The miles melted away, but they seemed no further from the estate. It felt like they were just walking in circles. Erk was about to make a jape about it when Ernsto stopped and knocked on an old oak.

The oak seemed half dead. Many branches were broken and those that lived had more knots in them then leaves. The roots were piled high making deep creases in the ground. The knocking brought about a squirrel that peaked down from a branch.

The squirrel scurried down the thick trunk and across a tangle of roots. Ernsto followed. The squirrel scampered over the ground and through the roots quickly. Erk soon lost sight of it. But Ernsto did not. He stayed with it tracking its movements with eyes while using hands to feel his way over the roots. Titos could not move through the roots with any speed and Erk was forced to turn back and help him.

Erk and Titos heard a chirping behind them. The squirrel had run full circle round the tree. Ernsto came lumbering up panting.

The squirrel dove into a hole between two deep roots. The three watched at a loss. What now?

A loud crack of wood on wood brought their attention back up into the branches of the tree. An old lady stood on a thick branch a large staff in one hand. She giggled and cackled. “Do you like my pet? I think she likes you.” She pointed the staff at Titos.

The Crone threw a handful of leaves at the men standing below. The dull red leaves morphed into a cloud of smoke, dark and hideous. The smoke transformed into a flock of birds that flew around the men’s heads. They ducked and dodged the birds. When they looked back into the tree the old woman was gone.

A tapping brought their attention to the side of the oak. Standing between two large roots was a beautiful woman, naked with long brown hair streaming down around her breasts and back. It stirred gently in the breeze revealing just enough to tantilize. She was holding the witches oak staff tapping on the roots. The witch’s raspy voice came from her well shaped and red lips. “Do you like this form better? It stirs you awake does it not? Beware of illusions. Especially you Titos.”

The beautiful form flaked away in the breeze revealing the old woman again. “Come.”

The men followed the witch around the tree three times, on the third turn she stepped into a darkness between two massive roots. “Come” her pale arm beckoned from the dark.

Erk led the way. He groped in the darkness but found no tree blocking his way, only empty blackness. Titos followed wearily. Ernsto hung back but also entered the Hermitage.

Erk stumbled down a few steps. He felt the nearness of the tree and put out a hand to catch himself. A smooth, well polished surface of wood met his outstretched hand. “Careful, steps.” He said back to those behind him. With one hand on the wall to his right, he moved forward. The wall curved right.

Erk, and soon the others, stepped into a large chamber dimly lit by a candle on a table cluttered with bowls and cups. It smelled like honey and decay. Erk stepped further into the room. The walls were living wood. Some of the shelves held scrolls, books, wooden cases. Others held assortment of body parts from all types of animals, birds and reptiles.

The witch clapped twice. A dozen candles blazed to life. And in the corner a fire place, cut into the living wood which was blackened deep, glowed awake with blue and green flames. Light flashed across the chamber.

The new light blinded the men.