Published at Kindle and Nook

Memoirs of a Super Criminal is now available on the Kindle and the Nook. You can read sample chapters at either place and for more action there is a sample below.
Posted by Daav Corbet at 2:57 PM No comments:

Memoirs of a Super Criminal is now available on Amazon Kindle. I am working through the formatting to publish it on the Nook and at Smashwords. This has been a great adventure and a huge learning curve. Now onto another novel. What will it be? Check back for updates.
Posted by Daav Corbet at 5:58 PM No comments: 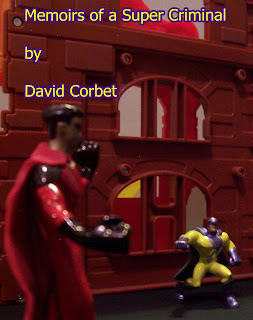 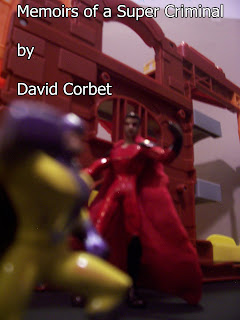 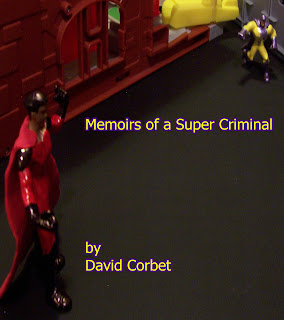 These are three possible options for the cover of my new novel. Please leave a comment as to which one you like best and maybe a reason why. You can read a sample of my novel below this post.

Memoirs of a Super Criminal, excerpt.

An alleyway door clanged open and two men exited hurriedly. In the distance an alarm screeched and blared. The two men wore costumes. The one leading the way was dressed in all black with red gloves cut to look like flames. The other wore a simple gray jumpsuit with black military boots and a black mask. They both carried sacks.

“Hurry, fool, this way.” The leader said in earnestness.

“Don’t call me a fool. You tripped the alarm, not me.” The other angrily answered.

They dropped their bags. The man in gray stepped against the wall and became invisible. The other raised his flame shaped gloved to defend himself but before he could shoot, a red blur was upon him.

Armageddon held the criminal by one arm. They were suspended a foot off the ground.

“Where is El Mag?” Armageddon whispered.

“Who the hell is that? Let go! You are crushing my arm!” The criminal cried.

“Tell me what I want to know or it will get worse,” Armageddon squeezed.

The criminal let out an agonizing squeal. “Stop, stop, stop! I don’t know who that is. Honest, stop!” The pain coursed down his arm. He could feel his bones slowly breaking.

Armageddon threw him to the ground and touched down lightly beside him. He reached down with both hands and grasped the criminal’s injured arm. He began to twist. The arm made a sickening sound as the bones broke and flesh tore.

The criminal screamed and clawed to be released. “Stop! I don’t know! Stop! Please!” He whispered in exasperation.

Armageddon had no sympathy. “Tell me, what you do know? Tell me now or I will rip your other arm off.” The criminal lay on the ground and whimpered.

Armageddon turned suddenly and looked over his shoulder. Laser bolts shot from his eyes and scorched a mark across the wall. A moment later a body fell to the ground, cut in two.

Armageddon looked back down at the man at his feet. His eyes glowed red. The criminal wet himself and cried harder. Just then a squad car pulled into the alley; blue and red lights cast shadows along the walls. Armageddon stood up and walked towards the car.

The police met Armageddon half way down the alley.

Armageddon addressed the police in an official voice. “Careful with that one. He has super powers. He can, could, shoot fire from his hands. The other one, he could turn invisible. I warned him twice to show himself and then gave a warning blast. I thought he might have been sneaking up behind me while I tried to subdue the other one. I guess I was off with my blast. Don’t worry I will file a full report as is my duty. Have a nice day officers.” Armageddon jumped into the air and flew away. His red cape billowed out behind him.

The lead officer grabbed his radio and called it in. The second officer inspected the scene. One body cut in two. The other one lay in a pool of blood with a limp hand ending in a mangled forearm cradled in his lap; pure hatred in his eyes as he glared at that red cape.

“What the hell happened?” The officer whispered to himself.

"Memoirs of a Super Criminal"

Posted by Daav Corbet at 9:11 PM No comments:

It has been some time since I posted here. Life kind of moves fast when you are not paying attention. So it is. But a fast life is not an empty life. I have been painting and writing. Every month on the first Friday I show my art work at Station Square in Old Town Pocatello.

I have also published a short collection of poems. It is currently available through Amazon Kindle. It is called One Year in the Mountains. I am working on a novel as well. It will be available in mid August.
Posted by Daav Corbet at 8:16 PM 1 comment: 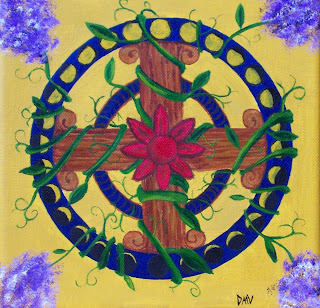 Monthly the moon is sacrificed as it moves through it's cycle. And yet it is reborn just as the spring is reborn from the dead of winter and once again the flowers bloom: red for the blood of the sacrifice and purple for the royalty of the heavens.
Posted by Daav Corbet at 4:38 PM No comments: 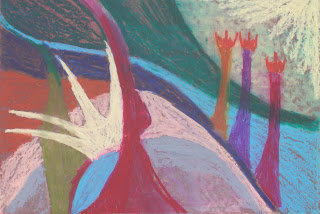 Epiphany is the time when the three wise men came and gave gifts to the Messiah. It is the origin of gift giving at the Christmas time. Some forms of Christianity still practice the giving of gifts on January 6th, instead of on Christmas day. It is an interesting story nestled in the second chapter of Matthew.
The Greek for the “wise men” is “magoi apo anatolon.” Literally it translates: magi from where the stars rise. The word “anatolon” which is often translated as “the east” is used repeatedly in reference to the rising of the star which the magi are following to find the Messiah. The Magi from the east saw the star in the east and followed it. The word anatolon has both the connotation of “rising” and “east.” Stars rise in the east and set in the west. Anatolon serves both as a geographical location and an action. The magi from the anatolon are searching for the Messiah by following the star’s anatolon. This is their realm of knowledge, expertise and location. They are successful in their venture and find the Messiah.

Are the Magi magicians, scientists of the day, crackpots, or representatives of other faiths? All of those scenarios have been presented in the literature at one time or another. Not much is known about whom these individuals are; who or what they represent exactly. The biblical account is silent. Christian tradition has assigned them names and places of honor. And the general designation of “wise men”, which may in light of the silence be the best designation, leaves much to the imagination. They were not questioned by the local authorities but rather accepted as valid emissaries on a mission. When they arrive at the side of the Messiah they are not questioned by the mother Mary but accepted.

What is the point of the story? This story only appears in the Gospel of Matthew. This gospel is largely concerned with proving that Jesus is the Messiah. The first chapter is devoted to two themes, first, to the lineage of Jesus back to the King David and the founder of Judaism ,Abraham; and second, to the miracle conception of the Messiah. The second chapter shows the secular rulers rejection of the “King of the Jews” but the acceptance of the “King of the Jews” by the “wise men.” The second chapter also shows an “exodus” event not unlike that of Israel in the time of their beginnings.
So what is the point of the story of the Magi?

Posted by Daav Corbet at 8:41 AM No comments: