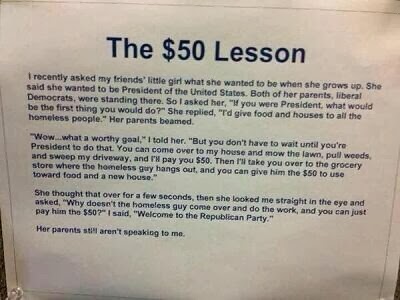 I have been seeing this picture make its rounds on the internet at blogs and on Facebook. When I first read it I kind of laughed, had a typical knee jerk reaction like must stuff on the internet is designed to do, but then the story stuck with me. I reflected upon the story and the point it was trying to make. I moved passed my knee jerk reaction and gave it some real thought. Certainly the little girl’s goals are worthwhile. Certainly we want the President and the government to be working to overcome such problems as homelessness and the causes of homelessness such as unemployment, underemployment, addictions, mental and physical disabilities, and other social problems. But there is more to the story than what the government can do, the rest of the story is what I can do. “I” being me, the little girl, the parents, and the homeless man. Personal responsibility must always play a part in any social problem. And for some it ends at personal responsibility and for others it begins with personal responsibility. By that I mean: some say if you were responsible for yourself you would not end up homeless; others say let us help you get on your feet so that you can once again become responsible for yourself and let us teach you how to do that.


There are many reasons someone may end up homeless. I think the implication of the above story is that this homeless person is lazy. And certainly laziness can bring you to a point of homelessness, but there are plenty of lazy trust-fund-babies who never have to worry about being homeless. And some of the hardest working people I know are just one paycheck away from being homeless. I think laziness as a cause for homelessness is not proven.

Many homeless people suffer from mental issues which make personal responsibility impossible. They do not possess the capability to be responsible for themselves in any meaningful way. If they do not have a support system of family or friends then what happens to them? The government can only do so much. And do you really want that homeless man showing up to mow your lawn?


But that is not the only problem facing society today. Modern warfare and medicine are creating an influx of medically dependent people. Because of the great strides in modern medicine many soldiers’ lives can now be saved. Soldiers who would have died of their wounds in previous wars are now coming home. Although they are living they are often injured to the point where they will always be dependent upon the medical professions due to loss of limb, brain injuries and PTSD. Many soldiers also become drug dependent. This is a road to homelessness.


So the question really is how do we equip these people to be self-reliant and take on personal responsibility, if it is even possible. And what do we do with those who will never make it that far?


So all of this was rattling around in my mind and I came up with a sequel to the above story.


A day later the little girl was at the store with her parents. She saw the homeless man sitting out front of the store with a little cardboard sign. She was trying to get up the courage to go tell the man about her friends who would hire him to mow the lawn to help him not be homeless any longer. Just when she thought she could do it she saw an elderly couple shuffle over to the man and start a conversation with him. The couple reached down and helped the man to his feet. The woman sized him up briefly and then moved off down the sidewalk and crossed the street. The elderly man took the homeless man’s arm and escorted him into the store.


The little girl, shopping with her parents, caught a few peeks of the two men in the store as they moved slowly up and down a few aisles filling a small basket with a few items. As the little girl and her parents were leaving the store she saw the woman returning with a bag on one arm. The woman met the two men as they were also leaving the store. Interested in the whole scene the girl scooted away from her parents and went to talk with the older couple.


“Excuse me but are you giving this man a job?” the little girl asked.


The couple smiled and the woman answered. “No he is not ready to work. Yet.”


“Then what are you doing?” Asked the girl innocently.


The couple smiled again. The woman spoke again. “We are giving him some help. Sometimes we all get to a place where we need a little help. I bought him a change of clothes. New, fresh clothes can be invigorating.” She held up the bag showing the girl the clothes from the thrift store down the street.


“And I bought him couple of easy to eat meals. Having a full belly can give you a new perspective on life.”


“Oh,” the girls responded, “but where are you taking him?”


The old man continued. “Well sometimes new clothes and food is not enough to get you back on your feet. He has agreed to come with us to a shelter our church runs. There he can spend a few nights, have a hot shower and maybe find a little peace. And if he is ready they also offer counseling and have connection with other organizations which can help him get off the streets.”

“Being willing to change is the first step though, and he seems willing today.” The woman added.


The little girl thought about it. She could smell the man and he did need a shower, and new clothes, not a job mowing lawns. The man looked about ready to fall over, she would not want him in the car with her. “But why are you doing this?”


The couple smiled again. “Because we are Christians* dear.”


“Oh” The parents, who were listening to the whole conversation, and the little said in unison.

*Instead of Christian you can certainly use the word human. Personal responsibility is a human trait that goes hand in hand with social responsibility. Historically, and for me personally, Christians are supposed to be the example of loving thy neighbor, being the Good Samaritan, and transforming the world for peace.
Posted by Daav Corbet at 8:37 PM